Alcohol is a legal drug that is commonly abused by people who drink it in order to feel its effects. Many people have a difficult time stopping drinking alcohol when they have already had one or two drinks and this commonly leads to alcohol abuse. Alcohol abuse prevention can be a complicated task to achieve due to peer pressure and since alcohol is commonly present at the majority of social gatherings.

If a person is a recovering alcoholic they may experience a hard time avoiding alcohol being that alcohol is a common substance found at parties, social gatherings, restaurants and people’s houses. The best and most effective way to prevent alcohol abuse or 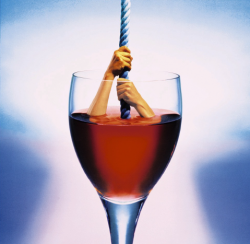 With the right attitude, effort and self control, you can stop yourself from abusing alcohol!

alcohol consumption is to avoid being near the substance.

Stopping alcohol consumption is a slow moving process and for most people it takes time. Alcoholics abuse alcohol when they drink and they cannot stop drinking once they start. If an alcoholic wants to cut back drinking without abusing alcohol they should write down a list of goals and stick with them.

According to www.helpguide.org, after a person has set their goals to stop or cut back their drinking, they should write down some ideas on how they can help themself accomplish these goals.

For example below is a list of five tips to help prevent alcohol abuse:

Whether a person is preventing alcohol abuse by cutting back or quitting all together they should make sure that the people they hang around the most are aware of their efforts. Some people may be hesitant to tell others of their problem and their goal, but ultimately the best way to stick to goals is to have other people helping to support the person with their goals.

Alcohol abuse prevention is an important goal for people to set because alcohol abuse can lead to complicated and severe health problems, especially if alcohol abuse is occurring on a daily basis. If a person is unable to cut back or stop drinking on their own they should consider receiving help from an alcohol abuse program.