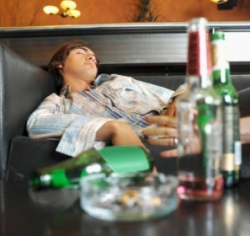 Don’t let the effects of alcohol abuse take over your life any longer!

There are many negative effects on a person caused by alcohol abuse. Some general ones include nutritional deficiencies and illnesses, impairment and accidents, mental and behavioral difficulties as well as major organ problems and of course even death.

Multiple organs that are effected by alcohol abuse, such as the brain, heart, pancreas, liver and also the immune system. Liver problems include hepatitis, cirrhosis, fibrosis and steatosis. Prolonged heavy drinking can also cause high blood pressure, stroke, cardiomyopathy, arrhythmias and even coronary heart disease.

Consuming too much alcohol can make a person more susceptible to diseases. TB and pneumonia are just two examples of possible illnesses that can result from the lowered immune system. A person’s body is also less resistant to fight off other illnesses and infections after abusing alcohol. Chronic alcohol abusers are at a greater risk of developing different types of cancer as well.

The physical effects of alcohol withdrawal syndrome can be extremely difficult and sometimes even deadly. Withdrawal symptoms such as shaking, sweating, nausea and vomiting, insomnia, seizing and hallucinations have been observed. These effects are often referred to as delerium tremens, or DTs.

Alcohol abuse can produce severe mental and behavioral problems as well. Some of the mental effects are short- and long-term memory loss, lack of concentration, and making someone feeling numb or sort of wooden. People under the influence of too much alcohol also make poor decisions such as engaging in risky behavior, becoming severely depressed or exhibiting violent tendencies.

Continued alcohol abuse can turn into alcohol dependence, which is also known as alcoholism. If you know someone who is struggling with alcohol abuse, don’t wait until it’s too late. Find out how to get treatment help so he or she can regain control over his or her life.