Alcoholism and alcohol abuse are two types of problems associated with consumption of alcohol. Indicators of alcoholism are seen when drinking causes serious disruptions in life, yet drinking is continued, and/or when a dependency upon alcohol is present.

Alcohol abuse is when drinking leads to problems in work, home, personal relationships, and with the law. Risky behavior, such as driving while under the influence of alcohol, is also a sign of alcohol abuse. Alcohol abuse differs from alcoholism because while there is an inclination for consumption of alcohol, there is not a dependency upon alcohol. 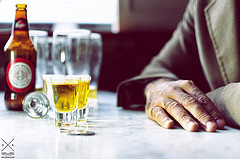 Withdrawal occurs when a person who regularly drinks alcohol in excess stops suddenly.

No one knows for sure what causes a person to have problems with alcohol. Some experts think that it may be a combination of a person’s:

Drinking a lot of alcohol can raise the risk for alcohol problems. Risk for alcoholism increases if a man consumes 15 or more drinks in a week, a woman consumes 12 or more drinks per week, or if 5 or more alcoholic beverages are consumed in one sitting at least once a week. A 12-ounce bottle of beer, a 5-ounce glass of wine, or a 1 1/2-ounce shot of liquor is defined as one drink.

If you have a parent with alcoholism, you are more at risk for alcohol problems. Other contributing factors for likelihood of difficulties with alcohol include easy access to alcohol, high stress levels, depression, anxiety disorders, schizophrenia, relationship problems, and peer pressure to name a few. In the U.S., about 3 out of 10 people drink at a level that puts them at risk for alcoholism.

The symptoms that occur when a person who regularly drinks too much alcohol every day and suddenly stops are referred to as alcohol withdrawal. Alcohol withdrawal symptoms usually occur within 8 hours after the last drink was imbibed, but have also been recorded as happening days later. Symptoms of withdrawal from alcohol peak 24 – 72 hours after their onset, and can persist for weeks after. Alcohol withdrawal may occur in teenagers or children, but occurs most often in adults. More severe withdrawal symptoms can been associated with persons suffering from other medical problems in conjunction with their drinking habit.

Common symptoms of alcohol withdrawal include:

In severe cases of alcohol withdrawal, a person experiences what is known as delirium tremens. Delirium tremens can cause very severe symptoms that are commonly treated with medication to help alleviate the withdrawal and detoxification process.

Symptoms typical of delirium tremens include:

Concern about drinking habits and the possibility of alcohol related problems may be helped by an honest examination of a person’s use of alcohol and the factors involved with and surrounding that use.