Causes Of Alcohol Abuse in Teenagers 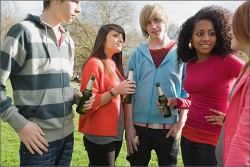 There are different factors that can cause alcohol abuse in teenagers.

The causes of alcohol abuse in teenagers come from a wide range of family, peer and emotional factors. There are also mental health issues that may cause alcohol abuse in teenagers. Typically, different causes are present when a teenager abuses alcohol. It has been found that a 16 to 18 year old girl is less likely to abuse alcohol when she has a close relationship with her mother and a teenage boy is less likely to abuse alcohol when he has a close relationship with his father.

When the teenager sees that there isn’t strong supervision by their parents the teen may become more likely to try alcohol. Parental involvement and supervision is important because it will help create an atmosphere that is free from alcohol and other controlled substances. Such supervision should also include the parent not abusing alcohol.

When families have conflicts that arise the teen may turn to alcohol to ease the pain or aggression. Family conflicts that have to do with divorce and other large life adjustments can cause the teen to act out and abuse alcohol. It is important when family conflicts or problems arise, that parents support their teens and allow them to go through the grieving stage. It always helps to encourage the teenager to talk about their feelings instead of bottling them up inside. When they bottle feelings up, they may reach out to alcohol to help ease the pain.

Family history can be another one of the causes of alcohol abuse in teenagers. When a teenager sees their parent or another family member abusing alcohol they may think it looks cool or that is adult like. Studies that have suggested that alcohol abuse can be hereditary. Children of alcoholics have a higher chance of becoming alcoholics themselves.

Peer pressure is one of the largest causes of alcohol abuse in teenagers. Typically, teenagers want to have approval or to be liked by their peers. When their friends abuse alcohol they will have a great chance of trying it and then becoming addicted. Some teenagers will take alcohol abuse to the extreme and drink during school. There have been reports found that teenage girls that abused alcohol would soak tampons in alcohol and then insert them into themselves. This method of alcohol abuse is highly dangerous and is practiced by some teens in an effort to get the effects of alcohol without having the smell on their breath.

The teenage years can be very difficult for many teenagers. Their bodies are starting to change and they are eager to start their adult stage of life. Their emotional state of mind may be out of place and may cause them to make irrational decisions such as abusing alcohol. When a teenager abuses alcohol, they are more likely to participate in thrill seeking behaviors. These behaviors are typically not behaviors that they would do normally. The alcohol in their system can make them believe that the risk is low and that they need the adrenaline rush.