When consumption of alcohol leads to problems at work, school, home, in your relationships, with the law, or causes a tendency toward risky behavior, an alcohol abuse problem is present. Alcohol abuse can be stimulated by several environmental factors.

The National Institute on Alcohol Abuse and Alcoholism sites that studies have indicated that people drink as a means of coping with economic stress, job stress, and marital problems. The absence of social support in these stressful areas, paired with the level of severity/regularity of the stressor, increases the amount of alcohol consumption. An individual is more prone to drink in response to stress when their expectations of the effect the alcohol appears to alleviate the stress to some degree. These findings also consider other aspects including possible genetic determinants of drinking in response to stress, an individual’s usual drinking behavior, the intensity and type of stressor, and the individual’s sense of control over the stressor. Researchers have found that high levels of stress influence drinking when alternative resources are absent, and when alcohol is handy. 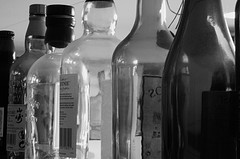 A variety of outside factors can contribute to alcohol abuse.

An estimated three million children witness acts of violence against their mothers every year, and many come to believe that violent behavior is an acceptable way to express anger, frustration, or a will to control. Substance abuse is clearly associated with domestic violence. Witnessing or experiencing family violence throughout childhood is a pre-cursor for alcohol abuse. Culturally, some groups accept domestic violence and intoxication as a way of dealing with frustration or venting anger more than others. The National Institute of Health states, “Probably the largest contributing factor to domestic violence is alcohol.”

Peer pressure is defined as the feeling that someone your own age is pushing you toward making a certain choice, good or bad. People want to be accepted and liked by people their own age. This need to be liked can cause a young person to try alcohol and even continue in a habit forming direction in order to please their friends.

Most alcohol consumed by youth is obtained through parents and friends, at underage parties and at home. Availability of alcohol or illegal drugs leads to increased use.