Rates of alcoholism continue to exceed those of all other addictive substance. According to the Centers for Disease Control & Prevention, an estimated 51.3 percent of the American adult population identified themselves as regular drinkers in 2013. While not everyone who drinks regularly remains at risk of developing a drinking problem, causes of alcoholism make certain people more vulnerable than others.

As with most any other form of addiction, causes of alcoholism can’t really be narrowed down to any one variable. While some people may have a strong genetic inclination towards alcoholism, other environmental factors also play a role. In other cases, environmental factors may play a central role as causes of alcoholism, though certain physiological responses must be present in order for a full-blown addiction to form.

Ultimately, causes of alcoholism hinge on an interrelationship between physical and environmental influences. Understanding how these relationships play out can help in spotting the risk factors that make a person more prone to alcohol abuse.

Other studies reveal certain inherited features can also predispose a person to alcohol abuse behaviors. These features include: 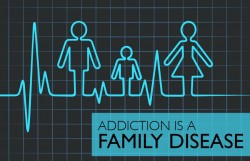 A history of alcoholism makes it a family disease.

A family history of alcoholism has a considerable bearing on a person’s likelihood of becoming an alcoholic. Families where one or both parents abuse alcohol tend to be dysfunctional in terms of how alcohol’s effects impair a parent’s ability to properly nurture and protect their children.

Children brought up in this type of environment develop a higher tolerance for risk than children from non-dysfunctional households. This risk factor makes them more likely to ignore warning signs when intoxication takes hold. In effect, dysfunction becomes the determining factor as a cause for alcoholism.

Alcoholism, in and of itself, naturally breeds mental illness as alcohol’s effects cause brain chemical imbalances to take root. As a cause of alcoholism, someone with a family history of mental illness faces a higher risk of developing substance abuse problems in general. Likewise, the severity of symptoms associated with mental illness also influences any one family member’s susceptibility to alcoholism.

Causes of alcoholism can be traced back to certain risk factors that tend to steer a person down the addiction path. Risk factors to watch out for include:

While genetic factors do carry a lot of weight, dysfunction in any form (family environment, mental health problems) has a strong bearing on how a person’s body and mind respond to alcohol’s effects.