Babies born to mothers who drink alcohol regularly and in heavy amounts while pregnant are often affected by a disorder called fetal alcohol syndrome. According to SUNY, fetal alcohol syndrome is a very tragic condition that is “completely preventable,” but one from which many children suffer.

In National Birth Defects Awareness Month, it is very important to keep the issues of fetal alcohol syndrome in mind and for pregnant women to be provided with the correct information that allows them to be aware of the condition and what it means for their unborn children. Fetal alcohol syndrome causes many birth defects as well as other issues that can lead to mental and physical problems in childhood and later in life.

Alcohol and Its Effect on Pregnancy

According to the NLM, “Alcohol can harm your baby at any stage during a pregnancy. That includes the earliest stages before you even know you are pregnant.” This is why many women who are actively trying to get pregnant decide to abstain from alcohol. Because there is no cure for fetal alcohol syndrome, its effects can continue throughout the entire life of a child born with this condition.

Because of fetal alcohol syndrome and the possibility that it could affect a child at any time who is exposed to alcohol, pregnant women are advised not to drink alcohol at all during their pregnancy (this goes for women who are hoping to become pregnant as well). The CDC states that wine and beer are just as harmful as any other type of alcohol on the fetus, and that fetal alcohol spectrum disorders (of which fetal alcohol syndrome is the most serious) “are completely preventable if a woman does not drink alcohol during pregnancy––so why take the risk?” 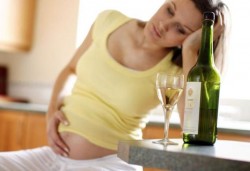 Drinking alcohol while pregnant can cause serious harm to your unborn child.

Some of the potential birth defects and other issues caused by drinking alcohol which together form fetal alcohol syndrome are:

Babies born with fetal alcohol syndrome often have less muscle tone than children born without this condition (NLM 2). This is part of the reason for the coordination problems which are caused as a result of fetal alcohol syndrome. Babies born with this condition are also usually shorter than other babies, In general, a child’s ability to coordinate, walk, and move will be inhibited by the heavy use of alcohol during pregnancy which is involved with the other central nervous system problems exhibited by these children.

Also included in the central nervous system issues caused by fetal alcohol syndrome are problems with the child’s ability to learn and remember things. Many children who are diagnosed with fetal alcohol syndrome experience issues in school because of their inability to retain certain information or remember information learned at the rate their classmates are able to. This can make life extremely difficult for the individual child, something which can be avoided if the mother abstains from alcohol.

Much in the same way, social abilities and communicative skills are lessened in those born with fetal alcohol syndrome. This can also make it difficult for children with fetal alcohol syndrome in school, as they will likely experience trouble making friends and communicating with others. Many of these children have issues “controlling their emotions” as well as simply socializing with other children and adults (NLM 1).

All of these issues can be extremely problematic and even dangerous as the child grows up. Many adults who were victims of fetal alcohol syndrome are not able to live on their own.

The NLM states ventricular “septal defect (VSD) or atrial septal defect (ASD)” are common birth defects exhibited by those who are born with fetal alcohol syndrome (NLM 2). These can be problematic heart defects that the child will live with for the rest of their life. “A physical exam of the baby may show a heart murmur” which is one of the tests doctors do to check for fetal alcohol syndrome in newborn infants. According to the NLM,

While there is no cure for fetal alcohol syndrome victims, the SGV states, “A person with FASD can get help with their learning and behavior to maximize their independence and achievements.” However, in some cases, the treatment options are unfortunately limited. For any individual with fetal alcohol syndrome, some type of help will usually be necessary.

What is the Minimum Amount of Alcohol Pregnant Women Should Drink?

In many cases, pregnant women are told that there is a minimum amount of alcohol they are safe drinking which will avoid any FASD. However, no one actually agrees for sure what this minimum is. According to SUNY, “There is always the possibility that some as yet unidentified harm to a baby might result from light or moderate drinking during pregnancy.” Therefore, pregnant women should consider the safest choice to be abstaining from alcohol altogether. This protects the fetus from the possible effects of fetal alcohol syndrome which, in a child who exhibits them after birth, can be extremely devastating and even dangerous.