There are a wide range of problems that alcohol abuse can cause in the workplace and the problems extend beyond the intoxication stage to include the hangover stage as well as the unpredictable effects alcohol abuse can have on a person’s, physical, emotional, and behavioral health.

Employers have a duty to keep their employees, clients, customers, and visitors safe in the workplace environment. Some workplaces have higher risks than others. Employers must be able to perform operations safely and are required to minimize risks or face huge losses and liabilities which could end their business. 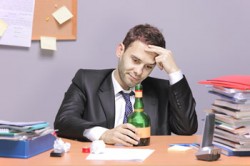 Drinking in your place of work can lead to negative physical and psychological effects.

Excessive drinking in leisure time, drinking before work, at lunch time, during work, or binge drinking becomes an occupational health and safety hazard when a person’s ability to exercise judgment, coordination, motor control, alertness, and concentration is affected.

Studies show workplace alcohol abuse leads to poor job performance, lost productivity, and increased dangers of accidents, injuries, and mistakes from mishandling equipment when the person is intoxicated on the job. There are many other problematic risks from hangovers, frequent absences, and the psychological effects of alcohol that can result in unusual, erratic, disruptive, or even violent behaviors.

According to the United States Office of Personnel Management, workplace alcohol abuse costs range from $33 billion to $68 billion per year, and “accidents and on-the-job injuries are far more prevalent among alcoholics and alcohol abusers.” Many times an accident or injury at work involving falls, slipping, tripping, or equipment handling will go unreported if a person is using alcohol. They may fear job loss or other repercussions so, in reality, these numbers may be significantly higher.

People who drive, transport others, operate heavy and dangerous equipment, work with hazardous materials, or in uncommon environments are at an increased risk of endangering others or suffering a fatality from the impairment of alcohol hours after the last drink. According to the Institute of Alcohol Studies, 68 % of airline pilots who were tested in performing routine tasks could not perform all of the operations 14 hours after reaching a blood alcohol level of 100mg/dl and the alcohol had left their system.

Stress, anxiety, depression, aggression, and personality disorders go hand in hand with alcohol abuse. Evidence shows that people who abuse alcohol may exhibit greater hostility, aggression, and behavioral problems than others and this may contribute to a lack of regard for co-workers or others. They may be reckless in their work ethics or job duties placing the safety of everyone in jeopardy.

Low morale, continuous arguing, and other strained interactions with co-workers can diminish the concentration and production levels of others further increasing the dangers. The person may become defensive or even violent if confronted with their problem or mistakes. They may begin to harbor resentment and act out their frustrations on family and friends putting them in danger, too.