Call Now: 24Hr Addiction Hotline 800-481-6965 Who Answers?
Home › General Info › Effects of Alcohol Abuse › A Look at What Alcohol Abuse Does to Your Body

A Look at What Alcohol Abuse Does to Your Body 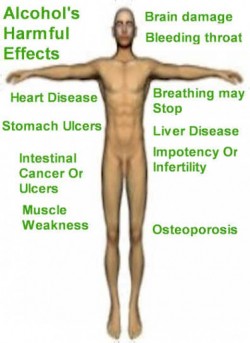 Alcohol has many damaging effects on the body.

In spite of alcohol’s widespread acceptance in everyday society, alcohol can nonetheless cause problems for those unable to manage their intake amounts. Alcohol abuse becomes an issue once a person continues to drink in spite of the negative consequences brought on by alcohol use. This turning point best exemplifies what alcohol abuse does to your body and your mind.

Alcohol metabolism processes mark the starting point for its effects as it moves through the various systems responsible for breaking it down. From there, what alcohol abuse does to your body takes the form of both short-term and long-term effects.

Long-time drinkers will eventually start to experience what alcohol does to the body in real-time as various symptoms take on a life of their own. Ultimately, alcohol’s effects become difficult to ignore once drinkers start to develop serious medical and/or psychological problems.

Alcohol metabolism rates have a considerable influence on its effects on the body, according to Brown University Health Education. When ingested, most of it gets absorbed into the bloodstream through the stomach and small intestines.

From there, alcohol travels to the liver where the actual metabolism process occurs. On average, the liver can metabolize one standard drink per hour.

Excess amounts continue to flow through the bloodstream and settle inside the body’s tissues until it can be metabolized. Much of what alcohol does to the body results from these excess amounts.

Once alcohol enters the bloodstream, it gains easy access to tissues and cells throughout the body. In general, what alcohol does to the body results from its ability to slow down central nervous system processes.

Alcohol’s effects in the brain produce the much sought after sense of relaxation, happiness and calm a drinker experiences. What alcohol does to the body goes far beyond a person’s immediate awareness. Other short-term alcohol effects include:

The withdrawal effects so often experienced by long-time drinkers result from the brain chemical imbalances that alcohol causes. Not surprisingly, much of what alcohol does to the body starts in the brain.

By altering brain neurotransmitter chemical levels, alcohol all but short-circuits normal brain functions. According to the University of Maryland Medical Center, these withdrawal effects experienced grow worse over time as brain chemical levels skew further out of balance.

Withdrawal effects can start anywhere from eight to 12 hours after the last drink, some of which include –

Long-term effects from alcohol abuse can develop within any number of major bodily processes. What alcohol does to the body over time takes places inside the body’s cells and tissues.

In effect, alcohol acts as a toxin capable of disrupting cell and tissue structures. As a result, drinkers place themselves at risk of developing various medical problems, some of which include –