The Problem of Alcohol Abuse on College Campuses

College students in particular face a high risk of developing alcohol abuse disorders, partly because of the unique stressors that come with college life. According to the National Institute on Alcohol Abuse & Alcoholism, approximately 19 percent of students aged 18 to 24 met the criteria for alcohol abuse disorder with only five percent seeking needed treatment help.

Nowadays, drinking has become part of the college experience with many students entering college with this assumption in mind. Oftentimes, students have already established drinking habits before entering college. Alcohol abuse on college campuses only works to encourages these behaviors.

In effect, alcohol abuse on college campuses not only poses a danger to those who engage in excess drinking behaviors, but also those who don’t. 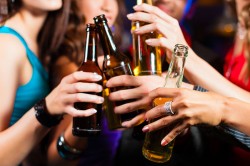 Underage drinkers are at high risk for developing alcohol addiction.

The statistics for alcohol abuse on college campuses are alarming, to say the least. On average, four out of every five college students consume alcohol. Of this number, half engage in binge drinking behaviors.

Statistics on the consequences of alcohol abuse on college campuses paint an even grimmer picture:

According to Penn State, a survey taken from 100 U. S. college campuses revealed an estimated 44 percent of college students engage in frequent binge drinking behaviors. Not surprisingly, the consequences of “bingeing” are many:

Students first entering the college environment go through a transition stage, leaving behind the supervisory influence of their parents to enter the unstructured environment of a college campus. Consequently, students tend to lean on peers as a support system as they adapt to college life. These circumstances set the stage for alcohol abuse disorders to take shape when peer groups view alcohol use as a normal part of daily life on campus.

According to New York University-Steinhardt, peer pressure acts as a motivating factor as far as risk-taking behaviors go. Students, in turn, find activities, such as frequent drinking and binge drinking easier to engage in as compared to young people not subjected to this form of pressure. Under these conditions, alcohol abuse on college campuses takes on a life of its own once the behavior becomes part of the culture.

In effect, blackouts result from memory impairments caused by alcohol’s effects. Rather than lose consciousness, a person can carry on conversations and engage in any number of activities during a blackout episode. Later on, a person has no recollection of what went on during the blackout.

As one of the more dangerous consequences of alcohol abuse on college campuses, students experiencing blackout episodes can engage in any number of risk-taking behaviors ranging from fighting to sexual intercourse as alcohol’s effects still lower one’s inhibitions during a blackout stage.

As alcohol acts as a central nervous system depressant, when consumed in large amounts, alcohol’s effects can shutdown vital bodily processes, such as respiration. Also known as alcohol poisoning, symptoms of overdose may include:

According to the National Institutes of Health, an estimated 20,000 emergency room admissions involved college students who overdosed on alcohol. In spite of this high occurrence rate, alcohol abuse on college campuses continues with many colleges enforcing minimal penalties for excess drinking on college grounds.

Alcohol abuse on college campuses creates an environment that’s ripe for sexual assaults to take place. Factors that play into this increased risk include:

While laws do exist to protect students from incidents of sexual assault, colleges reserve the right handle these cases as they see fit. Alcohol abuse on college campuses only works to aggravate the issue in terms of its overall acceptance in spite of the consequences it brings about.

Students engaged in alcohol abuse on college campuses most likely view their behavior as normal. From this perspective, it’s understandable why so few students actually seek out needed treatment help.

The stressors and pressures students experience on a day-in, day-out basis may see some students seeking escape through alcohol while others get caught up in alcohol abuse by following the example of their peers. In either case, frequent and/or heavy alcohol consumption wears away at a person’s ability to make sound choices. Without some form of intervention, students engaged in alcohol abuse on college campuses remain at risk of developing addiction problems that can stay with them for years to come.