Understanding the Dangers of Mixing Alcohol and Drugs

Alcohol is a dangerous substance on its own; in high quantities, it can cause breathing problems, coma, and even death, and drinking over the course of many years can make an individual more likely to experience liver damage, cancer, coordination problems, and alcoholism. However, mixing alcohol along with drugs only adds to these dangers and causes new ones to form. Using alcohol and drugs together is not recommended in any way, and even taking prescription medications with alcohol can be harmful, even deadly, whether these medications are being abused or not.

Opioid drugs, including illegal ones like heroin and prescription medications like OxyContin, Vicodin, and Dilaudid, are extremely dangerous when abused with alcohol. According to the NIDA, mixing these two substances can cause “dangerous slowing of the heart rate and breathing leading to coma or death.” This is because both alcohol and opioids slow the breathing rate down to an extremely low level when taken in high doses. Together, even in lower doses, they can cause more intense breathing difficulty than a person who normally uses one is accustomed to.

It is incredibly common among opioid abusers to drink while high, as both substances enhance the other’s effects. However, the deadly effects are also intensified in this case. This is especially problematic as one of the more popular emerging trends of youth drug abuse is to mix codeine cough syrup with alcohol and soda. Codeine is an opioid which can cause this same level of respiratory depression when abused.

Prescription sedatives can include three main types of drugs:

These drugs slow down the central nervous system, making them ideal for treating issues like anxiety and sleep problems. However, they also cause the heart and breathing rates to slow which can be dangerous when these drugs are taken in high doses. When combined with alcohol, the possibility of death is even more likely as the latter substance causes both of these effects as well. Prescription sedative and alcohol abuse together can be just as dangerous as drinking and taking opioids.

Stimulants are also abused both as prescription-based drugs (often used to treat ADHD) and illicit substances like methamphetamine and cocaine. The abuse of stimulants can cause extremely high body temperatures as well as heart failure and seizures, but drinking in addition to abusing these drugs often “masks the depressant action of alcohol, increasing risk of alcohol overdose.”

With larger and larger doses, the likelihood that the individual will experience a deadly overdose from one of these substances continues to rise. And as abusing the two substances together will intensify the person’s high, they will likely have no idea that something is wrong, feeling perfectly fine until they suddenly experience a heart attack or fall unconscious. Many people wrongfully believe that they effects of the depressant and the stimulant will cancel each other out, but that is not true.

You don’t have to struggle with substance abuse alone. Call 800-481-6965 (Who Answers?) toll free for help finding treatment. 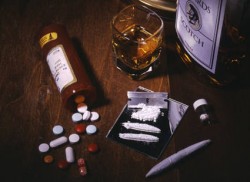 Different drugs have different effects when mixed with alcohol, and all have dangers you should be aware of.

Marijuana is one of the most commonly abused drugs in the country and is often smoked in party atmospheres where it is also normal to drink. According to the University of Notre Dame, alcohol “exacerbates the sedative effect” of marijuana” and abusing both substances together “increases the level of intoxication of both drugs.”The NIDA states that this combination also causes a higher increase in heart rate and blood pressure which could be dangerous, especially if one abuses these substances together often.

While this may not seem as harmful as other combinations, marijuana and alcohol abuse together also could be intense for someone who is not used to the effects of either drug and can lead to a higher potential for accidents and other problems.

These drugs are often “abused to enhance athletic and sexual performance” as well as appearance. Although they have many problematic effects of their own when abused (including causing behavioral issues and kidney damage, liver damage, and an increased risk of stroke or heart attack), taking these drugs with alcohol is more likely to cause violent tendencies or aggression in the user.

Both alcohol and steroids are associated with this kind of behavior, and it is especially dangerous to abuse them together. You are likely to wind up hurting someone as well as making a decision based on confusion, fear, or anger that could haunt you for the rest of your life.

These drugs are often taken for headaches and other body pains, and while they are not commonly abused, it can still be dangerous to take them with alcohol. Many individuals take these medications to combat headaches they experience as a result of hard drinking, but continuing to drink with aspirin or ibuprofen in your system can have dangerous results if done consistently.

The University of Notre Dame states that the combination “increases the risk for gastrointestinal bleeding.” This is a result that will often only occur after long-term abuse of this type; however, it is still a possibility and should be guarded against.

Drinking and Drugs Do Not Mix

When you take drugs along with alcohol, you risk many of the problems listed above and the dangerous consequences therein. Even in some situations where the drug itself is not made dangerous by alcohol abuse, it may be rendered useless which could be dangerous in itself. “Most antibiotics are less effective when taken with alcohol” which can become a severe problem for someone who was prescribed this type of medication.

Abusing alcohol with addictive drugs can also increase your potential for addiction and endanger you based on the behavior you are likely to exhibit under such strong intoxication. In almost every instance, alcohol and drugs do not mix and the use of both together should be avoided at all costs.