Drinking alcohol in moderation can be fine; some studies even state that it is healthy to drink a little. But what causes a person to fall into the realm of problematic alcohol use? And when is someone merely abusing alcohol and exhibiting danger behaviors versus someone who truly needs help in order to stop drinking for good?

There is a difference between alcohol abuse and dependence, but what separates these alcohol use disorders does not come down to just one difference or one issue. It is important to assess your situation as an individual and decide which factors you recognize as being a part of your alcohol abuse.

Alcohol dependence is also known by many other terms like alcoholism or alcohol addiction. Dependence is the most accurate term, though, because a person is not only psychologically dependent on alcohol to help them relieve stress but also physically dependent on the substance as well. This individual would experience withdrawal symptoms if they were to stop drinking, which is one of the most important distinctions to remember.

According to the NLM, there are four main factors that define alcohol dependency, including:

The disorder is very similar to drug addiction. However, because alcohol is a different type of substance (and its consumption is always legal as long as the individual is not endangering themselves or others), it is difficult to compare it directly to drug addiction. Wright State University also states, “Many health professionals prefer more precise language that distinguishes between alcohol dependence and alcohol abuse.” This is why the condition is not called alcohol addiction which would equate it with drug addiction, an entirely different illness.

Alcohol abuse is a different disorder, less severe than alcohol dependence, but still dangerous. A person with alcohol abuse disorder may not be in as much trouble as someone who is already dependent on alcohol, but the condition can still be very dangerous. The kind of behavior that constitutes alcohol abuse can lead to the issues listed above, and someone who has an alcohol use disorder of this kind might experience any of the symptoms above except for dependence.

A person who demonstrates the behavior of alcohol abuse will:

Alcohol abuse is any consistent or constant dangerous or problematic behavior with respect to drinking or alcohol use. A person may drink off and on, but that does not mean they suffer from this condition. Alcohol abusers are constantly experiencing issues related to their drinking. 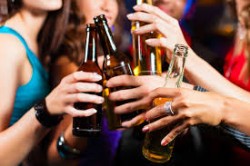 Alcohol abuse and alcohol dependence are very different conditions. The former can lead to the latter, though, which is why it is so important to make the distinction between the two. Alcohol dependency is worse in many respects because it is much harder for people to quit after they become dependent. The condition is a disease, and many individuals who go through treatment for alcohol dependency often have to abstain from drinking completely in order to not fall back into these old patterns.

Still, alcohol abuse is a problem on its own. It takes only one time for someone who constantly abuses alcohol to hurt themselves or someone else by driving drunk or doing something else reckless. Drinking excessively is never safe, which is why both conditions require treatment.

Alcohol Withdrawal and Use Disorder Treatments

Alcohol abuse itself is listed as an alcohol use disorder, but that does not mean someone suffering from it requires the same amount of treatment and care as someone with alcohol dependence. For one thing, a person who is not dependent on the substance will not have to worry about going through the possibly life-threatening withdrawal symptoms that will occur in those who are dependent. These symptoms, according to the NLM, can include:

A person might need to be sedated “until withdrawal is complete” if it is extremely intense. Someone who just abuses alcohol regularly will not have to go through this, though they will probably need some treatment of their own.

“Studies of U.S. military treatment programs show that completion of the full aftercare program is the strongest predictor of treatment success” (Wright State). For both conditions, this is true. However, because of the intensity of alcohol dependence, treatment may often need to be longer, perhaps the difference of ninety days for alcohol abuse to a year or more for alcohol dependence. Some individuals attend support groups that, for the those who are dependent on the substance, is a lifelong commitment in order to stay on the right track.

How Can I Know?

According to the NIAAA, “Approximately 7.2 percent or 17 million adults in the United States ages 18 and older had an AUD in 2012,” including both alcohol abuse and dependence. Knowing the difference between the disorders can help you take stock of your situation and decide what you must do next.

The difference of the two issues may be clear, but that does not mean exhibiting the signs of alcohol abuse should cause you to breathe a sigh of relief. You will only get worse if you continue on the way you are going, likely to become dependent before long.