An Alcohol Abuse Definition You Can Understand

Alcohol dependence is an epidemic causing thousands of deaths each year and relating to the deaths of many others. Over twenty million people in the Unites States are currently dependent on alcohol. Studies show that the average American has their first alcoholic beverage when they are between the ages of 11-13 years old.

Alcohol is legal and you can buy it at just about any corner or convenience store so it is more readily available then other illicit drugs. There is also very little stigma attached to drinking. Sure, when it goes to far we all sit back and think, “Oh so and so’s daughter is going to rehab for her drinking”, and shake our heads in judgment but nobody thinks twice about having drinks after work with friends, or planning social events around drinking alcohol.

So when is the line crossed from abusing alcohol to alcohol dependence? It can be tough to know the difference as the symptoms can appear to be the same.

What is Alcohol Abuse?

Alcohol abuse may look the same as alcohol dependence but there are some key differences between the two. People who abuse alcohol may consume large amounts of alcohol and might even do it regularly. According to the accepted alcohol abuse definition, the difference between someone who abuses alcohol and someone who is dependent on alcohol is that they have control to some degree of the amount they drink and also when they drink alcohol. Binge drinking can cause alcohol poisoning which can cause heart failure, respiratory failure and if alcohol is consumed like this for a long time it can also lead to long term health issues like kidney and liver disease.

Who is Alcohol Dependent? 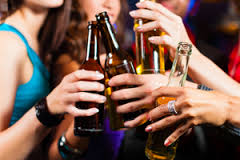 Alcohol abuse can lead to serious health and lifestyle problems.

A person is considered to be dependent on alcohol (alcoholic) when they must drink alcohol to keep from going into withdrawal. Alcoholics will drink first thing in the morning or even in the middle of the night because when the amount of alcohol in their systems drops they suffer from terrible withdrawal symptoms. Their hands will be shaky and they will sweat profusely.

A person who is dependent on alcohol thinks about drinking alcohol or obtaining more alcohol nearly every waking moment. They will make sure they do not run out of alcohol and keep alcohol in their cars, and their offices. Strategically keeping supplies in random places sometimes even keeping them hidden to conceal how much alcohol they are actually consuming everyday from family and co-workers. Someone with an alcohol dependence simply can’t control their drinking.

Alcoholics live every day thinking about when and where they will get their next drink. This takes up most of their thought at every waking moment and leaves little time for anything else. Marriages may be broken, children might be neglected, and jobs might be lost.

According to The NJI, “a California arrest study found alcohol or drugs, or both, were involved in 38 percent of the domestic violence incident arrests”. People who are dependent on alcohol are also much more likely to be come dependent on other drugs as well. If not treated, an alcoholic will literally drink themselves to death.