Few people would disagree that excessive drinking is harmful, but, even moderate drinking can be considered alcohol abuse if there is a “continued use of alcohol despite the development of social, legal, or health problems” as defined by the National Institute on Alcohol Abuse and Alcoholism.

What are the Characteristics of Alcohol Abuse? 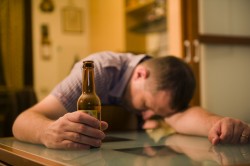 Alcohol abuse is characterized by excessive and frequent  drinking.

It may be considered alcohol abuse if the person drinks alcohol:

What Are the Side Effects of Alcohol Abuse?

Psychological effects of alcohol abuse include impaired cognition, memory, judgment, emotional stability, and loss of inhibitions that result in immoral, dishonest, criminal, or dangerous behaviors. Many people who abuse alcohol suffer from increased anxiety, depression, mood swings, aggressive behaviors, stress, and insomnia from the imbalances in neurotransmission functions between the brain and central nervous system effecting every other part of the body.

The Difference between Alcohol Abuse and Alcoholism

Like alcohol abuse can cause distress or harm to the person using alcohol or others, these same characteristics are associated with alcoholism. The difference, however, is that alcoholism is also characterized by tolerance, dependence, uncontrollable use, denial, and withdrawals.

Tolerance increases as the brain becomes desensitized to alcohol consumptions. The adaptations result in physiological changes that require the person to use more alcohol to achieve the desired effect. When dependency develops, it creates overwhelming urges to use alcohol, the need to use it to feel a sense of “normalcy”, and withdrawals when the person’s blood alcohol content drops to a certain level.