Alcohol consumption has become an accepted pastime within many societies across the globe. Within the United States, occasions for drinking run the gamut in terms of types of environments and functions, some of which include-

With so many opportunities to partake in drinking, it’s no wonder signs of alcoholism so often go
unnoticed. 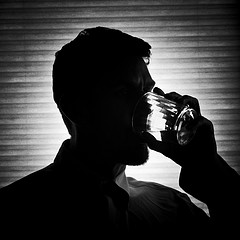 According to the Centers for Disease Control & Prevention, an estimated 51.3 percent of American adults identified themselves as regular drinkers in 2012. While using alcohol on a frequent basis can definitely contribute to the likelihood of developing alcoholism, other factors play a role in how warning signs of alcoholism develop within a person’s life.

According to the National Institute on Alcohol Abuse & Alcoholism, warning signs of alcoholism develop out of four contributing factors –

Anyone who’s been drinking on a regular basis for any length of time has probably experienced some degree of withdrawal effects from alcohol. Experiencing withdrawal on a frequent basis marks the first sign of alcoholism.

Withdrawal effects develop out of the brain’s growing dependency on alcohol’s effects. As the brain becomes more dependent, individual brain cells lose their ability to function normally on their own.

With regular alcohol use, the brain develops an ongoing tolerance for alcohol’s effects. As tolerance levels rise, a person must drink increasingly larger amounts in order to experience the expected “high” effect.

This warning sign of alcoholism can happen without a person even knowing it, especially in cases where the “high” effect becomes the main reason for drinking. Tolerance levels will continue to increase for as long as a person engages in excess drinking behaviors.

Out of all the warning signs of alcoholism, the appearance of persistent drug cravings marks a crucial turning point in a person’s alcohol consumption habits.

While it may seem like heavy drinkers deny they have a drinking problem for convenience sake, more oftentimes than not, they actually believe their drinking behavior is acceptable and/or normal. Much like the persistent drug cravings experienced, this warning sign of alcoholism stems from a person’s psychological dependency on alcohol. In effect, the brain’s reward system has defined alcohol as a normal and necessary part of everyday life.