Effects of Alcohol Abuse on Women

Women are uniquely affected by alcohol in ways that men often are not. A single drink for a woman is equal to multiple drinks for a man and the damaging effects of alcohol abuse on women quickly set in. Unlike men, the effects of alcohol abuse on women tend to take much more quickly resulting in an accelerated rate toward alcohol dependence and increased problems early on regardless of background or other factors. 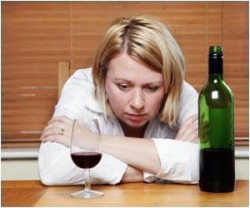 Women tend to move very quickly from alcohol abuse to full-fledged addiction. Where men may be able to drink moderately for a prolonged time before the effects of alcohol abuse really set in, women tend to begin feeling the negative effects and the continued urge to drink much more quickly resulting in an increased risk of dependence for women over men. While this does not mean that women are generally addicted to alcohol more often than men, it does mean that women have an increased risk of becoming addicted sooner than men generally do.

What Makes Women Sensitive to Alcohol?

The damaging effects of alcohol abuse on a woman occur as a result of various biological factors. Women are more vulnerable to alcoholism because of the way that alcohol interacts with other components of their genetic or biological makeup. For instance, women generally have a higher body fat content than men and the fat within the body is what retains alcohol. The resulting outcome is that women who drink generally remain intoxicated for a longer period of time than men, the effects of the alcohol create many damaging side effects during this time and the body suffers more harshly than a man or even than a women who has a lower body fat content.

Both men and women have various enzymes that break down alcohol content. Women have significantly lower levels of the two enzymes that are primarily responsible for breaking down alcohol content and reducing the impact that the alcohol has on the liver and kidneys as well as other parts of the body. Lower levels of alcohol dehydrogenase and aldehyde dehydrogenase cause more alcohol to be absorbed into the blood stream effectively making a women get drunk more easily and remain drunk longer than a man.

Hormonal level can also affect the manner in which a woman metabolizes alcohol. While it is unsure exactly how changes in the hormones throughout the menstrual cycle impact the effects of alcohol abuse on women, it is known that hormonal changes do have some impact on the effects that alcohol will have when a woman drinks especially if she drinks regularly.

Women are generally more prone to dangers and various risk factors associated with the effects of alcohol abuse. Because a woman will get drunk more quickly and remain drunk longer than a man, there are a number of risks associated with being under the influence. Additionally, women are more prone to alcohol abuse as a result of childhood neglect, physical abuse or sexual abuse that may have occurred when they were younger, while they were under the influence or otherwise.

Women are at risk of a wide range of health consequences when they drink alcohol. Consistent use of alcohol often leads to alcohol dependence which has a number of potential complications and consequences. Not only are women more prone to become alcohol dependent, many treatment programs are not formulated to help women to specifically cope with their individual concerns and needs in treatment. This leaves a number of gaps and potential problems which can arise even if a woman who has suffered the damaging effects of alcohol abuse seeks treatment and help.

Women face a number of challenges when it comes to getting help for alcohol abuse. Many are the sole breadwinners or caretakers for families with children to look after; others are reluctant to seek help because they don’t want to be labeled as an alcoholic. The first step to getting the right help is to accept that there is a problem, accept that women are more prone to alcohol abuse related problems than men right from the start, and accept the fact that treatment is the best solution for recovery without relapse.

Women are often reluctant to seek help in a treatment facility that focuses solely on alcohol abuse. While this isn’t necessarily a bad thing, there are often mistakes made in treatment if the focus is not solely on the problem at hand and how to fix it. Shying away from treatment does not lead to recovery.

Women are also very reluctant to admit that they are addicted to alcohol. In fact, the damage effects of alcohol abuse on women are often overlooked or mistaken for another problem by doctors or healthcare practitioners because women understate the amount of involvement that they have with alcohol and how many drinks they actually consume in a given day. One of the biggest challenges women face in treatment is within themselves in admitting a problem and admitting a legitimate need for help.