Unfortunately, the majority of alcohol users believe that drinking a large amount in a short time in order to have fun or party with friends is not dangerous. In truth, this behavior can be very problematic and is also a form of alcohol abuse.

If you have been abusing alcohol and need help call 800-481-6965 (Who Answers?) now to find safe, reliable rehab centers. 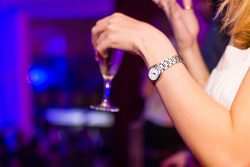 Binge drinking, even just on occasion, is considered alcohol abuse.

Partying can often lead to alcohol abuse. Even if a person isn’t an alcoholic, their use of the substance can be problematic and constitute abuse. The two most common types of abuse (excluding alcoholism) are heavy and binge drinking.

Commonly, those drinking socially and especially in a party situation will abuse the substance in this way. Therefore, partying can be considered abuse, especially if someone is not aware of the amount they are taking in and does not stop consistently to avoid severe intoxication.

Most individuals who do enjoy social time in this sense do not concern themselves with staying above intoxication or avoiding a certain BAC. Someone who parties consistently may be especially likely to experience issues, but even an individual who only drinks heavily in this sort of situation once can still experience:

Partying vs. Drinking in Moderation

According to the National Library of Medicine, responsible drinking is much safer than partying. This behavior constitutes drinking “no more than 1 drink per day if you are a woman and no more than 2 if you are a man.”

Many people enjoy the multiple effects of alcohol when partying with friends, including the lowered inhibitions and social comfort, but enjoying alcohol can be done safely through responsible drinking. In most instances, those who drink and party are not moderate in their choices.

In most cases, yes, only because those who do use the substance in this way often do so in large quantities without the responsible actions that need to be taken to avoid abuse. Many people enjoy drinking socially and in exciting situations like partying or being out with friends. However, it is much harder to do so responsibly and to avoid abuse when you are not considering how this use can affect you.

If you believe you may be abusing alcohol severely or that you will need a professional treatment program in order to stop, call 800-481-6965 (Who Answers?) now. We will help you find rehab centers that will cater to your needs as well as provide you with the best treatment options possible.

Recognizing when Casual Drinking is No Longer Casual