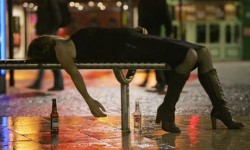 Someone who abuses alcohol is likely to drink despite the consequences.

Alcohol has remained the most commonly abused substance for decades on end. In spite of alcoholism’s favorable treatment success rates (compared to other addictions), only one out of every 36 people in need of treatment actually seek treatment help, according to the Florida Institute of Technology.

As with any addiction problem, the sooner a person can recognize characteristics of alcohol abuse the easier it is to recover from alcohol’s damaging effects.

As a characteristic of alcohol abuse, denial becomes an all but natural result of damaged brain functions. Over time, the brain’s dependency on alcohol translates into a positive perception of alcohol’s role in a person’s life.

Persistent cravings are yet another cumulative characteristic of alcohol abuse. In addition to the physical dependency that takes place, alcohol directly alters the brain’s reward system. In essence, this reward system distinguishes between positive and negative factors or stimuli within a person’s moment-to-moment experience. This system also plays a central role in the brain’s learning processes.

As alcohol directly interacts with brain cell functions, the brain’s reward system is at the mercy of alcohol’s effects. With increased dependency, come ever-increasing cravings that eventually persist on a continuous basis.

Consuming increasingly larger amounts of alcohol over time is one of the most damaging characteristics of alcohol abuse. Alcohol’s effect on individual brain cell receptor sites has two costly consequences, one of which is dependency. Increased tolerance levels become the second consequence.

In effect, the more dependent brain cell receptor sites are the more “desensitized” they become. As a result, the brain requires larger doses of alcohol to experience the expected “high” effect. Meanwhile, brain functions have grown so dependent to the point where it needs alcohol to function normally.

Withdrawal effects worsen in severity the longer a person continues abusing alcohol. Since chronic drinkers soon seek out the “hair of the dog that bit them” as a means for relief, withdrawal effects also account for why it’s so hard to stop drinking

Over time, characteristics of alcohol abuse start to show up in a person’s everyday routines as well as within interactions with others. Once alcohol takes center stage in a person’s life, negative consequences may take the form of –

Alcohol abuse has become a serious issue for someone who continues drinking while their life is falling apart.