How to Recognize Teen Alcohol Use

Teen alcohol abuse is prevalent as well as dangerous. According to the NIAAA, “In 2009, about 10.4 million young people between ages 12 and 20 drank more than ‘just a few sips’ of alcohol.” While this may seem like normal adolescent behavior or unproblematic, “5,000 people under age 21 die each year from alcohol-related car crashes, homicides, suicides, alcohol poisoning, and other injuries such as falls, burns, and drowning.”

Teens who drink alcohol are putting themselves in a dangerous situation, and it is important to know the signs of such and how to recognize whether or not your teen is drinking regularly. Look for the signs of teen alcohol use listed below in order to recognize this issue in an adolescent you know.

Recognizing the Behavioral Signs of Teen Alcohol Use 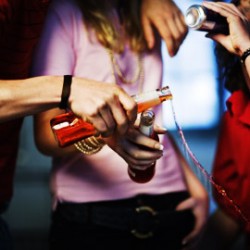 You may be able to tell if your teen has been drinking by changes in their behavior.

Teens often have many problems that they are facing on a day-to-day basis and some cannot be controlled. While acting out can sometimes be a product of another issue, the NIAAA lists “academic and/or behavioral problems in school” among the warning signs of teen alcohol use. Teens who are drinking constantly often let their grades slip, misbehave in class, and show other problematic behavioral signs that you can catch when paying attention.

Some of the other clear behavioral signs of teen alcohol use are:

There are many behavioral signs that point to teen alcohol use. Abusing alcohol can change an adolescent’s entire attitude and, therefore, the way they act toward everyone in their life.

In some cases, however, issues like these may not be caused by alcohol abuse but by other stresses in a teen’s life. So how can you know the difference? It is important to look for more clear signs of alcohol abuse in addition to this strange, new type of behavior.

Recognizing the Physical Signs of Teen Alcohol Use

Teens who are drinking may also show the signs of being drunk often. This can be very dangerous and, if it happens often, exhibits that the individual is constantly drinking and does not care about the consequences. The signs of drunkenness are:

These signs of drunkenness will be very clear, especially the more the individual has imbibed. If your teen is acting strange and seems to be unable to coordinate their body and their speech, there is a possibility that they could be drunk. In many cases, these individuals will have the “smell of alcohol on [their] breath” or will begin a “sudden, frequent use of breath mints” (VDH). If you notice these new signs when your teen exhibits the symptoms of being drunk, they are very likely abusing alcohol.

There are also other physical signs of alcohol abuse, including:

Alcohol use in teens can cause many physical issues as well as behavioral. An individual may also become very pale and develop dark circles under their eyes if they are constantly abusing alcohol. Their energy will become lower, especially when they are unable to drink, and they will show the signs of alcohol use even if they are not currently under the influence of the substance. In addition, a teen’s attitude will change emotionally as a result of alcohol use.

Recognizing the Emotional Signs of Teen Alcohol Use

According to the Surgeon General, “Teens with behavioral or family problems are at higher risk for alcohol use.” These issues can become very stressful for adolescents, and they may hope for an escape through the use of alcohol. Other teens may become stressed about school, friend problems, or work and start drinking as a result of these issues. Some teens have a desire to take risks or fit in with others and begin to drink as a result of this fact.

A teen who begins drinking could very well be dealing with one or many of these issues, and if you notice them as being a particular problem for the individual, it may be important to discuss it and find out if alcohol use is actually occurring.

If you believe you have recognized teen alcohol use in someone you love, it is important to handle it correctly. In most cases, it is best to talk to the individual and decide together if they might benefit from professional treatment and help. Either way, teen alcohol use can lead to dangerous consequences and should be addressed.