The average age for a teenager’s first try of alcohol is 12 years old. Whether parents like it or not, teenagers are not only embracing alcohol at an early age, they are also suffering from the side effects that comes along with alcohol abuse. According to the National Institute on Alcohol Abuse and Alcoholism, young people often drink a lot less than adults but when they drink, they drink a lot more. Usually a young person will have more than 5 drinks during one event or occasion, which puts them in the category of binge drinking. 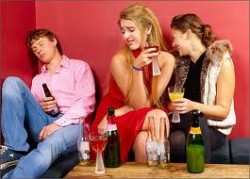 Teenage drinking is very common, and can have serious consequences.

There are many teenage alcohol abuse facts that parents should be aware of including the first signs of alcohol abuse:

There are many problems, both physical and mental, that teens can suffer from while abusing alcohol.
These include:

Many teens will start drinking at a very young age and continue through their high school and college years, according to the Centers for Disease Control. If a teen continues to drink into their adult years, they can and will eventually suffer from long term alcohol abuse symptoms like:

By taking time to go over teen alcohol abuse facts with young kids and teenagers, there is a potential of reduced risk of teen alcoholism. Teens will have the ability to see and understand the potential outcomes of the decisions they make regarding alcohol and will hopefully make wiser decisions.