Alcohol Dependence is a substance abuse related disease in which a person will drink large amounts of alcohol even when they know that it will have dire consequences to their health and cause destruction in all aspects of their life. Many have tried to stop on their own multiple times without success.

When a person seems to have a reckless disregard for the amount of alcohol they consume or regularly participates in binge drinking you might automatically think they are alcohol dependent. This is not necessarily true. Sometimes people drink a lot of alcohol but are able to maintain some amount of control over when they drink and how much they consume. Alcohol abuse can however lead to alcohol dependence down the road as tolerance builds up requiring more and more alcohol to have the same effect and can be very dangerous. It can also cause chronic physical health problems such as kidney failure and liver disease. 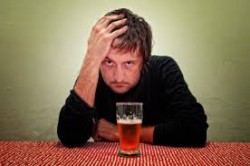 If you are dependent on alcohol you feel sick without it.

People who are alcohol dependent on the other hand will exhibit some symptoms that are indicators that they no longer have control over the amount of alcohol they consume. They will show symptoms of withdrawals when they are not able to drink and will become sick and shaky without alcohol. They will often drink when they wake up or during work to prevent the symptoms from occurring.

They drink more alcohol even when they want to stop or are trying to cut back on the amount they are drinking. They will neglect their responsibilities at home and at work, often even neglecting their own children. Those dependent on alcohol will continue to drink even when they know that if they don’t stop it could cause severe health problems like liver failure and kidney disease.

To put it simply, they cannot stop. Much of their day might be spent recovering from the effects of the night before and of course making sure there is more alcohol to drink throughout the day. According to NIH at “They may also put themselves in dangerous situations, like driving under the influence or have legal or social problems such as arrests or arguments with family members due to their drinking”.

People who battle an addiction to alcohol or a dependency on alcohol will usually need professional treatment to start the recovery process and begin to live healthy lives again. Usually that process starts with a detoxification process and then long term care that includes counseling. There are many organizations that offer counseling and treatment based on the 12 Step Program such as Alcoholics Anonymous. If you need help you should talk to your doctor and you can use the SAMHSA Treatment Locator or call 1-800-662-HELP (4357).