What are the Recommended Limits for Alcohol Consumption?

Alcohol is a legal substance that, in moderation, can be used safely and may even be healthy, according to certain studies. However, there are times where drinking becomes dangerous, and many individuals do not realize that there is a hard line between safe or recreational use and abuse.

There are specific, recommended limits for alcohol consumption as well as certain activities that should not be performed while under the influence. These limits have been placed on alcohol use for very important reasons, as drinking too much can cause a person to severely injure themselves or others, and abuse of the substance over time may cause dependence and other disorders. Make sure you understand these limits and try to abide by them as much as possible.

What is Considered One Drink? 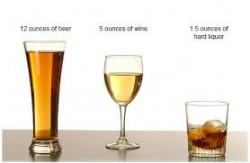 The measurement for ‘one drink’ depends on the type of alcohol.

It is important to understand what is considered to be one drink, as many of the limitations placed on alcohol use are measured in this way. One type of alcoholic drink is different from another type, and this must be made clear, as different kinds of drinks may affect a person either more or less intensely. The NIAAA lists the ways that the term one drink can be defined.

Understanding this, symptoms that fall under the category of low risk drinking include:

High risk or heavy drinking includes habits that are any higher than those listed above. Individuals who exceed these amounts, either daily or weekly, have gone beyond the recommended limits for alcohol consumption.

Why are the Standards Different for Men and Women?

“Research shows that women start to have alcohol-related problems at lower drinking levels than men do.” Other reasons why the standards differ is that women weigh less than men do on average, women have less water in their bodies than men tend to do, and that a woman who drinks the same amount as a man is usually likely to become intoxicated more quickly. This is not always correct in every case, but these are the recommended amounts that both men and women should attempt to stay under when drinking.

What is Binge Drinking?

Abusing alcohol over time can lead to alcohol dependence and other use disorders. Drinking any more than the amounts listed above consistently is considered to be risky drinking or alcohol abuse. However, binge drinking is also very dangerous.

According to the NLM, binge drinking consists of “drinking about five or more drinks in two hours for men.” If a man exceeds this amount even once, it could be problematic and lead to issues like respiratory depression, unconsciousness, coma, and even alcohol poisoning. For women, the amount considered to qualify as binge drinking is four or more drinks in two hours. While many people do not consider binge drinking to be dangerous because they may only do it from time to time, there is a strong risk of overdose and other issues for those who do binge drink.

The blood alcohol concentration, or BAC, is measured by the weight of alcohol in a certain amount of an individual’s blood. This measurement can determine the amount of alcohol in the person’s body. According to the CDC, “Drivers with a BAC of 0.08% or higher (i.e., drunk drivers) are considered alcohol-impaired by law.”

Many individuals often argue that they feel fine at this point, but not knowing that you are impaired is often a sign of intoxication. In any instance, it is better to plan on not driving, even after just having one drink. It is very difficult to determine your own BAC, and getting a designated driver is always safer in the long run than attempting to get behind the wheel of a car. There is no flexibility with the rule of 0.08% BAC, and those who break it will go to jail.

According to the NIAAA, a person who has one heavy drinking day a month has a 1 in 5 chance of suffering from an alcohol use disorder while those who have 2 or more heavy drinking days a month have a 1 in 2 chance. Although alcohol can be fine in moderation, the more heavily and often it is abused, the more dangerous it becomes to the individual.

These recommended limits for alcohol consumption are in place for a reason, and they protect users from endangering themselves (and others) with their alcohol use. Making sure to adhere to these limits can help protect you from many issues that may befall you, whether they are more likely to be caused by long-term or acute alcohol abuse.