Signs of Alcoholism to Look Out For 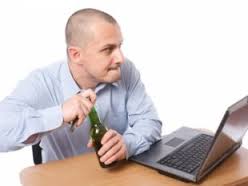 Drinking in secret, while at work, or in other inappropriate situations may indicate alcoholism.

Alcohol has been used for centuries to celebrate, relax, and socialize, but, many succumb to its addictive properties and are unable to stop using even when they suffer physically and psychologically from their alcohol dependency. Alcoholism causes a person to consume alcohol uncontrollably or compulsively, become preoccupied with alcohol, drink in unacceptable places or at unacceptable times and continue to drink, despite consequences that negatively affect them or others.

Alcohol abuse can involve using alcohol frequently, uncontrollably, in high amounts, or going on alcoholic binges. Drinking in places or during events where others find it unacceptable is a sign that the person is has an uncommon disregard for their alcohol use and how it may affect others, a classical sign of alcoholism.

Denial is a continuous sign of alcoholism. It takes a lot for an alcohol user to admit they have a problem and often, it involves life changing circumstances such as loss of loved ones, arrest, illness or accidents to make this happen. They may try to hide their abuse or react defensively when they are confronted regarding their abuse and set aside times to drink when they will be uninterrupted.

Beginning with an occasional drink, the person builds a tolerance to alcohol’s effects with repeat consumption and frequency. When a person becomes dependent on alcohol, they will suffer ill effects, known as withdrawals within hours after their last drink. The more this progresses the more physical signs and symptoms of their dependency will occur. They may wake up in the morning, after not having alcohol in their system overnight and feel shaky or nauseous. So, they may begin to drink early in the morning to stave off these symptoms before they begin normal activities of the day.

Alcoholism leads to instability of emotions, self control, relationships, responsibilities, cognitive, memory, and psychomotor skills. It can cause behavioral problems that endanger the alcoholic as well as others if the person engages in activities such as driving or swimming while under the influence or engaging in other risky behaviors. According to the National Institute on Alcohol Abuse and Alcoholism, “Alcoholism is the 3rd leading cause of preventable deaths in the United States”.

Alcoholism is a progressive disease that makes a mark on the person’s mental health and alcoholics often have coexisting mental health disorders which make recovery from alcoholism extremely difficult. Deterioration of the mind from alcohol consumption affects millions of people and they become aggressive, violent, angry, extremely irritable, depressed and suicidal. In chronic cases, alcohol causes psychotic episodes of deliriums, hallucinations, and many other psychiatric problems.

Alcohol is a toxic chemical that acts as a central nervous system depressant. It causes physical impairments including liver diseases, cardiac problems, respiratory infections, neurological problems, and brain damage. These impairments could be signs of alcoholism.